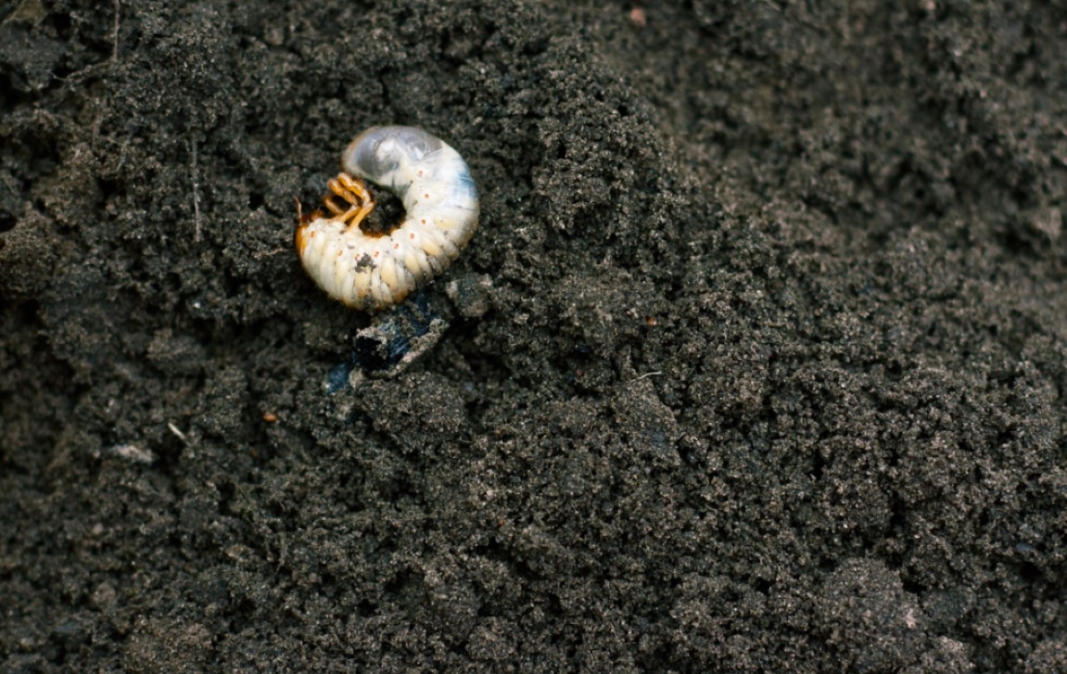 Have you been noticing large patches of dead grass in your lawn that peels up like a carpet? If so, you may have a problem with grubs. Don’t fret! These pesky critters are one of the most common pests in our gardens and luckily, they can be managed. However, before you can get rid of these menaces, you must understand them! Check out our information below and if you find yourself with any lingering questions, call one of our three locations or come by the Plant Clinic to speak with a plant specialist. 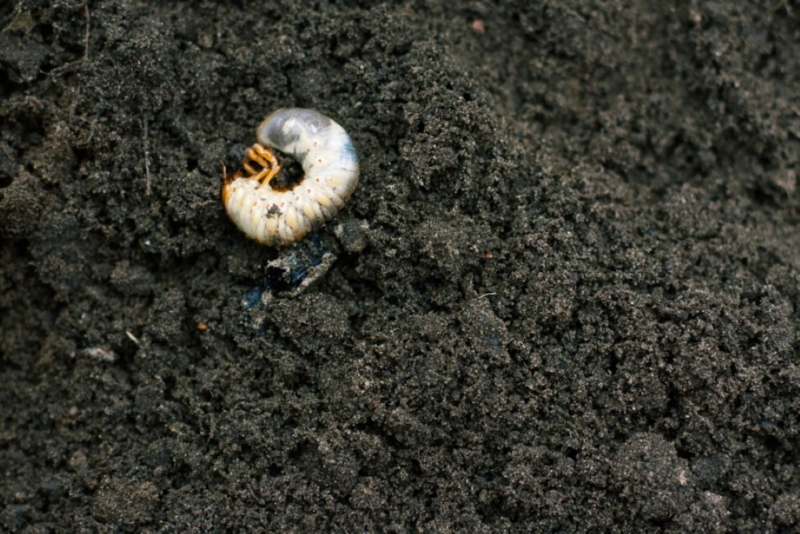 Grubs are the larval stage of any beetle or scarab. There are many varieties of scarabs in our area that can cause serious damage to turf grass. Beetles like masked chafer, green June beetle, and may beetle are native beetles that can sometimes cause damage to the lawn. More serious pests like the invasive Japanese and Asiatic beetles will frequently cause damage in the lawn. 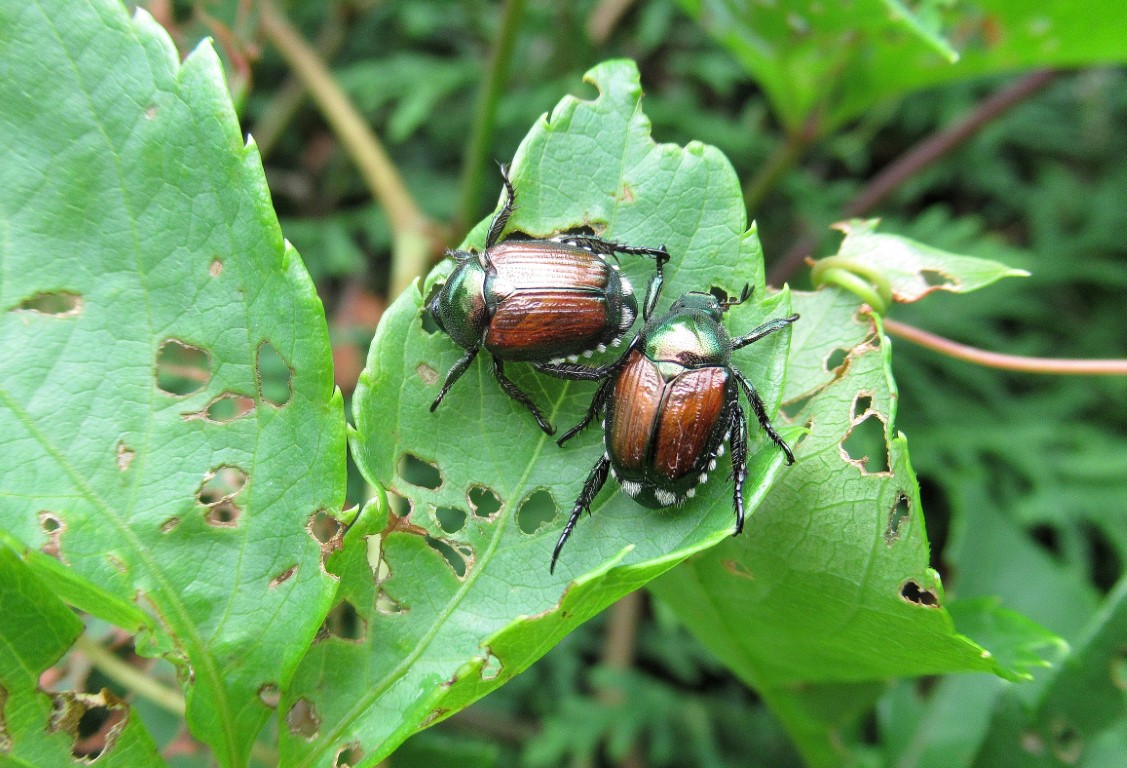 Japanese beetles were unintentionally introduced to the United States in 1916 and today they can be identified in over half of all U.S. states. Adult beetles have a copper elytra (wing covering) with metallic-green coloration and actively feed throughout the summer. Adults are active during the daytime and may be found on a large variety of ornamental and agricultural plants, in particular on roses or pear, apple, plum and cherry trees. 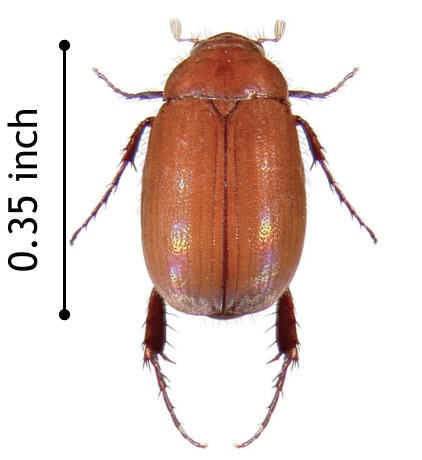 Asiatic beetles were also first detected in New Jersey in 1922. The adult beetle is 3/8” long and cinnamon-brown. The adult actively feeds and lays eggs during the night time. Shine a flashlight on the ground to identify active beetles in your garden beds. Asiatic beetles also feed on a wide range of plant material.

Understanding the life cycle of these beetles can mean the difference between success and failure in working to effectively control them. Both Asiatic and Japanese Beetles have a single generation each year, with adults feeding through the summer and grubs overwintering in the soil, then becoming active as the soil warms up and they begin to eat root material. In late May or early June adults emerge from the ground to breed and continue feeding.  Females will typically burrow into the soil of the lawn to lay eggs in mid-July. Grub stage sod damage may become evident during August and September when grubs are aggressively feeding in order to store energy for the winter.

Adults Japanese and Asiatic beetles eat the tissue between leaf veins on ornamental and agricultural plants, giving the appearance that the leaves have been ‘skeletonized.’ They also frequently go after ripening fruit and will even eat the flowers of roses and other members of the Rosaceae family. However, what makes these invasive beetles such a serious pest is that not only do the adults cause extensive damage to plants; the larvae are also voracious eaters, particularly of sod roots. In cases of heavy grub infestation it is very common that this will result in large dead patches of grass that quickly turn yellow or brown. 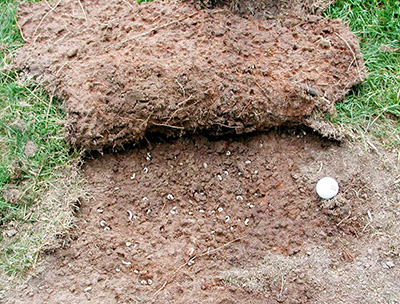 Upon inspection, this damaged turf will peel right up from the ground with very little effort.Often you will also see many of the culprits still lurking below the surface as you investigate. This makes grubs very easy to identify; however, it is best to identify grubs as they are just becoming active, before they become a detriment to our landscapes. This is usually sometime in early to mid-May and middle to late August. To identify a grub infestation, cut three sides of a square-foot section of grass and carefully lift the sod up to avoid damaging the sod. If you see more than five or six grubs in that small space, it is time to get moving on grub control. 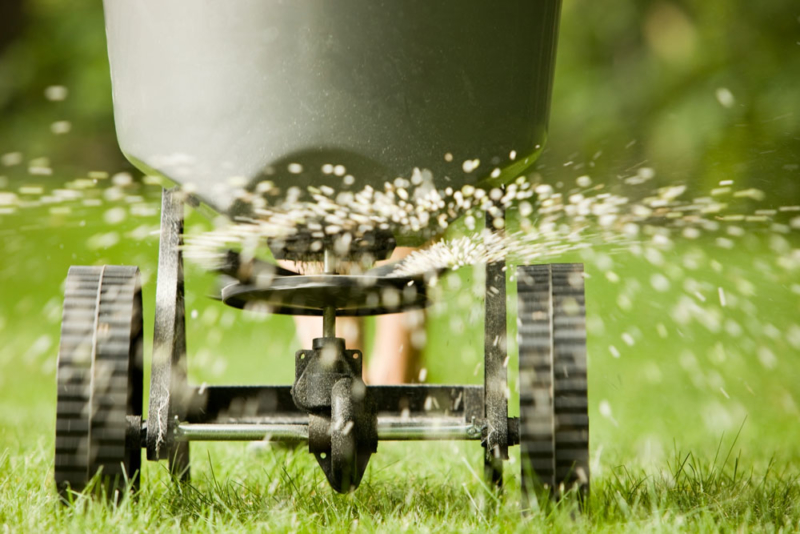 Season Long Control: With proper timing, season long control products such as BioAdvance Season Long Grub Control are the most effective methods to treat and prevent a grub infestation The ideal time to apply is before adult beetles emerge. For the Northern Virginia area, we recommend application of these products during the last week of May. If you are not sure whether adult beetles have emerged or not, you should call the garden center to speak with a plant clinic representative.

24-Hour Grub Killers: Should you miss the window for effective application of season long products,24-hour grub killers can be effective at wiping out a population of feeding grubs overnight. These products usually contain strong pesticides such as Dylox, which kill many other lawn pests such as ticks.

When applying these products, remember to always read the label instructions and follow them exactly to ensure safe application. Also, while products like those listed above can help us to control unwanted garden pests, they can also have an impact on ‘beneficial’ insects as well. Many chemicals listed for control of grubs have shown to impact fireflies, solitary bees, ladybugs and other desirable garden insects. For this reason application of these chemicals is only recommended to control serious infestations.

Organic alternatives to conventional pesticides have been used to control Japanese beetle grubs for decades.  These alternatives are more selective in their control and less likely to impact beneficial insects.

Milky Spore: Paenibacillus popilliae is a spore-forming bacterium which is pathogenic to grubs. The commercially available milky spore is exclusively pathogenic to Japanese beetle larvae. In order to be effective the spores must be ingested by the grubs. Once the grub is infected, it has a white appearance which contributed to the name of this product. For milky spore to be effective, there must be a significant grub population where it is applied to the soil.

Milky spore can be hand applied in its powder form in one application, or there is a granular form that can be spread using a lawn spreader more easily, but requiring more applications over a longer time frame.

Beneficial Nematodes: Beneficial Nematodes can be used to control various garden insects such as moths, ants, and most importantly grubs. As with milky spore, the denser the grub population is the more effective the nematodes are at spreading and infecting the grubs.The best time to apply them is during August, when young grubs are feeding on root material. Nematodes will work quickly to control grubs but they can be very sensitive to environmental conditions. Bright sunlight in particular can kill nematodes, so it is recommended to apply them at dusk or during a rainy day for best results.

Other methods of effectively controlling beetle grubs involve going after the adults. There are many insecticides that can be used to control adult populations on garden plants. Furthermore, many extension services and universities recommend using pheromone-baited beetle traps to control adult beetles as well as removing and destroying adult Japanese and Asiatic beetles when discovered in the landscape. If you have questions about these options or any others, please give us a call or visit the plant clinic at one of our stores.