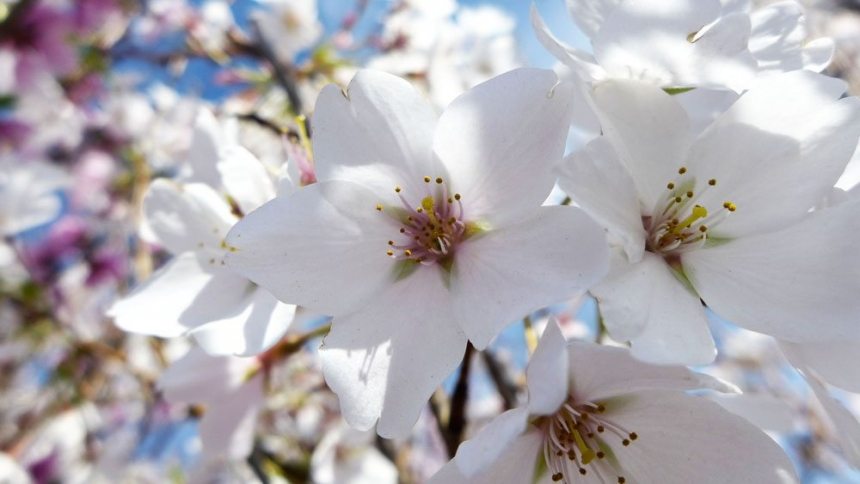 With our climate, we’re fortunate to have the option of planting many different types of trees.

We carry about 100 different types of spring flowering trees at Merrifield Garden Center. Here are some of our most popular varieties:

A hybrid of the Japanese flowering cherry, Yoshino cherry is the stunningly beautiful tree that blooms during the National Cherry Blossom Festival around the Tidal Basin in Washington, D.C. The profuse blooming of these trees creates a soft pink cloud of color, drawing millions of visitors from around the world.

With its prolific, large double pink flowers, ‘Kwanzan’ is another extremely popular variety.

Weeping Higan cherry is frequently used as a specimen tree in the landscape. The arching branches gracefully hang to the ground, creating a spectacular form. It blooms in early spring with very pale pink flowers. And there is a variety with deep pink, double flowers.

‘Autumnalis’ is known for its two seasons of bloom – prolific pink blooms in early spring followed by sporadic flowering in the fall.

‘Okame’ is the earliest blooming and the deepest pink of the Japanese cherries. It also has a darker bark and a more rounded, slightly smaller mature shape than the other cherries.

With several species native to North America, serviceberry blooms just before dogwoods with beautiful clusters of white flowers in early spring. Its fruit, which ripens to a blue color in June, is a big attractor to birds. In the fall, the leaves turn a gorgeous yellow to red color. Some of our most popular varieties are ‘Autumn Brilliance’ and ‘Cumulus.’

Redbud is a native tree that is best known for its small clusters of magenta-pink flowers that bloom in late March to early April. 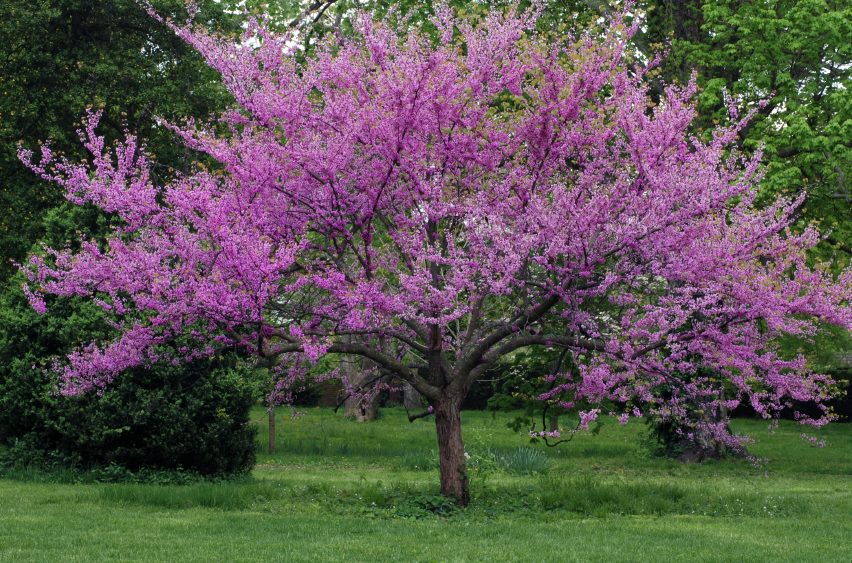 After blooming, heart-shaped leaves emerge and turn a light yellow in fall. ‘Forest Pansy’ is a variety with purple / maroon leaves that fade to dark green in late summer.

There are many wonderful varieties of deciduous, spring flowering magnolias with beautiful blooms of purple, pink, white and yellow. Here are a few to consider: 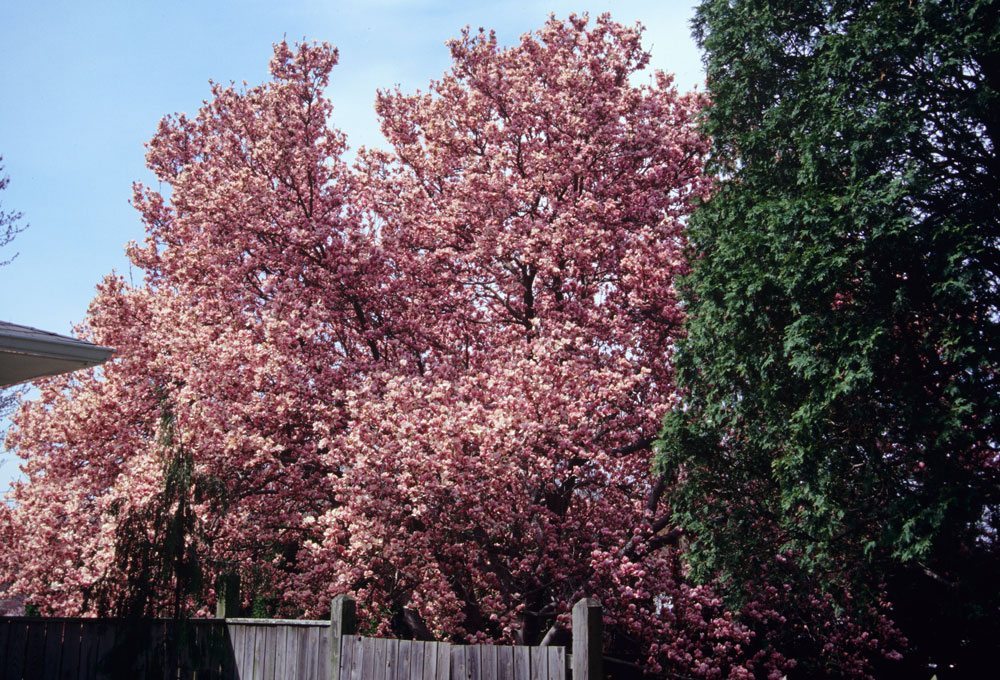 Perhaps the most dramatic of all early blooming trees, saucer magnolia produces large flowers in brilliant shades of pink in March to early April.

Prized for its delicate, satiny white petals that are sculpted like stars, the star magnolia unveils its magnificent, slightly fragrant flowers in early spring. ‘Royal Star’ is a popular cultivar that blooms just after the saucer magnolia. Frost damage is rare since this is a later blooming tree.

The Girl Magnolias were hybridized by the U.S. National Arboretum and are an excellent choice for smaller gardens. They bloom a little later than the star magnolia, which reduces the chance of frost damage and delivers a beautiful display of color in April. ‘Betty,’ ‘Ann’ and ‘Jane’ are popular varieties.

A Southern favorite, Sweet Bay magnolia delivers a creamy, white flower with a delightful lemon fragrance in early June. In our area, this small tree drops most of its leaves over the winter, although the ‘Henry Hicks’ variety retains about 25% of its leaves. Sweet Bay magnolia, a native, grows best in normal soil with sun or part shade, but it also tolerates swampy conditions. ‘Green Shadow’ is a bit more evergreen. 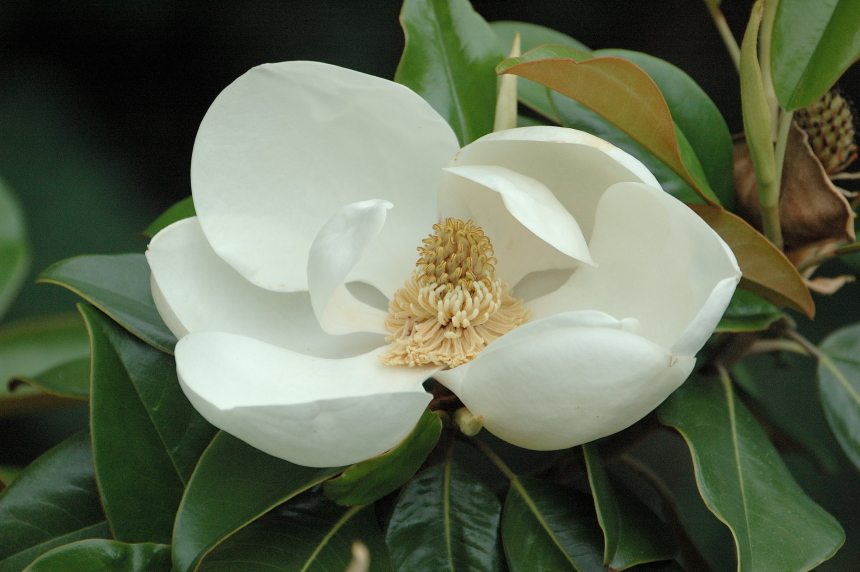 Grab an iced tea, a seat on the front porch and relax with the sweet fragrance of magnolia in the air. Now this is Southern living.

Versatile and native trees, Southern magnolias are wonderful additions to any landscape. They can be used as specimen or screening trees and even as a hedge or espaliered on a wall or trellis. Magnolias are highly valued by floral designers, who use their lustrous leaves in floral arrangements.

Southern magnolias produce their best flowers in bright locations with at least three to five hours of sun per day. They can also be planted in areas with less sun, where you can enjoy the dark, glossy green foliage. We recommend that you plant the tree in a somewhat protected location sheltered from cold, winter wind that can lead to desiccation.

Spring and summer are the ideal times to plant Southern magnolias, so they have an entire growing season before the onset of winter. Dig a hole two to three times the diameter of—but no deeper than—the root ball. Mix a generous amount of Merrifield Planting Mix with the existing clay soil and use this blend to fill in around the roots. Southern magnolias don’t tolerate dry conditions, so it’s important to provide regular watering while they’re getting established and occasional watering during dry spells as they mature. Magnolias rarely have insect or disease problems.

For more information, read our planting guide or talk to one of our tree specialists.

Southern magnolias can become quite large, but it takes a long time. It is more common in our Virginia, Maryland and Washington, D.C., metropolitan area to see specimens that are 30’ to 40’ tall with a 20’ spread. You might want to plant your magnolia where leaf litter is hidden from view to make maintenance easier. It may be difficult to grow grass or plants under the tree’s canopy.

Growers have developed over 100 varieties of Southern magnolia.

Here are a few of the most hardy that we recommend for our area:

This is a very narrow, upright form that is ideal for areas with limited space or for screening. ‘Alta’ is a slow growing variety with a mature height of about 20’ and a width of about 8.’ Its growth is very dense and compact with medium-dark green leaves and white, cup-shaped flowers.

Prized for its dense, compact growth and cold hardiness, ‘Bracken’s Brown Beauty’ is a very popular variety. It will mature to a height of about 30’-40’ with a 15’-20’ spread. The leaves are a brilliant green on the upper surface and rusty brown on the underside.

‘D.D. Blanchard,’ which boasts beautiful, dark green leaves with bright orange/brown undersides, is a hardy, classic beauty that matures to about 30’-40’ tall and 15’-20’ wide.

Possibly the most cold hardy of all Southern magnolias, ‘Edith Bogue’ features creamy white flowers and light green leaves. It grows to a height of about 30’ and a width of 15.’

An excellent choice where space is limited and for espalier training, ‘Little Gem’ grows to about 20’ tall and 12’ wide. The leaves and flowers are a bit smaller than other varieties, but they’re prolific and fragrant. The sweet-smelling flowers continue to open throughout the summer months.

A very compact, upright tree that makes a great small specimen or accent in the landscape. Large, fragrant flowers cover the tree in the warm months. A reddish-brown felt can be seen underneath the shiny, deep green leaves.